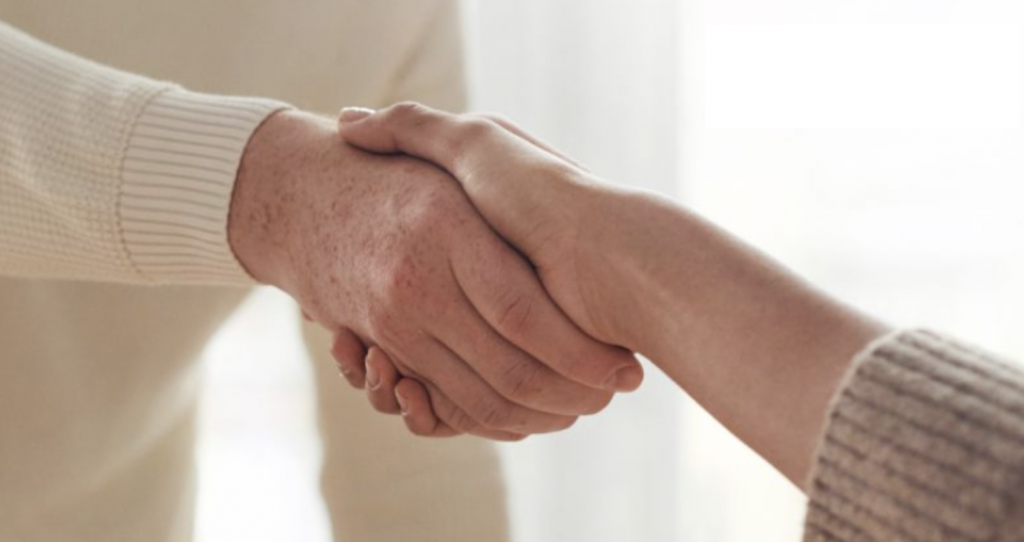 The return of the handshake

I am delighted, as I’m sure you are, that we are starting to shake hands again. Historians tell us that our ancestors, the chimps, have been shaking hands in some form or another for around 7 million years, and we have long continued with that tradition too; so a short spell of self-isolation or social distancing was never going to kill it off.

I remember meeting Julie Andrews, star of The Sound of Music and Mary Poppins, at a film event once. I introduced myself but felt that it wouldn’t be the quite same if I didn’t offer my hand. So I said, ‘I’m thrilled to meet you and I must shake your hand.’ She smiled kindly and said, ‘I understand!’ We shook hands and both laughed.

She knew, quite rightly, that millions of people had grown up with her films and that meeting her in person might be a red-letter day for them.

I remember saying the same thing at an award ceremony to Dame Edna Everage (Barry Humphries appearing as Edna). Graciously the Australian Superstar shook my hand firmly and, with the wicked twinkle in her eye that she is so well-known for, said, “Well, it’s something to tell the grandchildren, isn’t it!’

A greeting without a handshake just is a proper meeting. Saying ‘Hello’ to someone isn’t the same as saying you’ve actually met them. That requires more than words. It requires a handshake. An exchange of touch that cements a meeting. Not too firm, not too soft. A meeting of equals with mutual respect. It’s a simple gesture that says, ‘I see you. And I value you.’

I am so pleased that we are beginning to be able to shake hands again, I do hope you enjoy the connection that a handshake brings as much as I do.

Ella Al-Shamahi, in her fascinating book The Handshake, sums it up brilliantly:

If Covid-19 has taught us anything, it’s that touch really matters – and our impulse to do it likely comes from deep within our DNA. As a basic unit of touch, nothing works as well as the handshake: it allows us to transmit chemosignals, build trust, gesture quickly and universally, send positive signals of agreement, unity and acceptance. The cultural identity of the handshake whereby it represents equality and respect is one to celebrate, too, as is its presence across the world in diverse and specialised forms. In all its manifestations – from finger-snapping to its value in business, its historical significance and use by chimps – we should celebrate it for the versatile, positive helpful gesture it is. Human history would look very different without it.   (Profile Books 2021)