Why disagreements can be healthy

Many of us do not enjoy disagreement and conflict and see it as very negative and unhealthy. This isn’t always the case. Here, I give my reply to select questions about the validity of disagreements.

1) How can disagreements be useful in terms of growth, teamwork and relationships?

Ah, that’s a good question. How can we be called a team if we disagree? To be honest with you, I actually worry when I see too many similar personality types at an organisation. You need a good spread, for example, an extrovert, introvert, the thinker, the processor and so on. Companies with such diversity tend to have a balanced outlook.

Yes, disagreements are also natural within such teams, but this does not have to be a bad thing, as long as it isn’t toxic and someone is not being frowned upon at work or having to walk on eggshells. This will only harbour resentment and a lot of passive-aggressive behaviour.

Some of the best teams I have worked with have been led by women because:

On the other hand, in my experience, some of the most dysfunctional teams are led by men where:

2) Please can you give me tips on how I can be constructive while disagreeing?

People do get defensive when somebody disagrees with them, this can lead to anger.

However, disagreements can be constructive if:

I generally recommend my clients to take a couple of seconds before disagreeing. This gives you time to think so you can construct your reply and, more importantly, time to breath so you can set yourself up for a soft and relaxed rebuttal, rather than one fuelled with anger or frustration. These techniques will stop you from responding with a knee-jerk reaction.

3) Ok, so we have disagreed and discussed but we have not come to a new consensus, what do I do when nobody gives way?

Disagreeing is essentially a negotiation. The key is to find a ‘win-win’ solution – one where both sides feel they’ve come out of the negotiations without being cheated or railroaded.

Even better, is not just to disagree with someone but offer an alternative, acceptable solution as well. The more I work with senior leaders, the more I find that women are particularly good in this area.

A good way is to make sure that you not only see the value in their argument but that you say that you value it. For example, “I totally see why you might think that’s a good solution. It seems to makes total sense. However, we might also consider a counter argument …”

At the end of the meeting, it’s good to check in with everyone. Especially those who feel they haven’t been listened to enough when you’ve chosen to go down a different route. Go around the table and let everyone speak without being interrupted before you all leave.

As my grandmother said, “Never let the sun go down on your wrath. Always make peace before the end of the day.” A night of seething resentment only builds and spills over into the next day.

4) Do you have examples of when a disagreement has turned into something positive?

I have several female clients who are excellent in this area. The way they do this is to let go of their own ego for a moment.

They cleverly suggest the sapling of an idea which the other person can then ‘develop’ into one which they will probably claim as their own.

A girl friend of mine was in a pop band in the 80’s. The record company producer was determined to have everything his way. The band decided that they wanted a saxophone solo on the track but he blocked it at every turn. So they recorded the whole track with the sax solo but played him the version without it.

After listening to it, he said, “It’s missing something, don’t you think?” He then paused, and without any irony, said, “I think it needs a sax solo.” They told him he was a genius and said they’d go back to the studio that afternoon. The next day they played him the ‘new’ version with the sax solo (which they had already recorded the day before) and he was delighted. He was convinced it was all his idea and so he was now solidly behind the promotion of the single. My girl friend’s cleverness, and lack of ego, had won the day!

5) Do you have any other thoughts on how to make a disagreement positive?

When this ‘open policy’ is in place, people know that there’ll be no repercussions for speaking out. This encourages people to be creative in their thinking. Rather like a good brain storming session where everything is put out there and nothing is blocked.

When people feel they’re being heard, they feel valued. And as my grandmother also taught us, “People just want to be valued. Make people feel special and they’ll love you.” 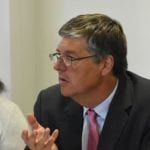