Next Slide Please: What’s the point of PowerPoint?

It was comic. It should have been rehearsed so that when he got to the end of a slide, an assistant would click the next one.

Apart from being irritatingly repetitive, it implied that the slide deck was somehow running the show.

I’ve nothing against PowerPoint as such, but it should always be used as an aid, not as the driver.

My natural style is not to use slides at all. I prefer to engage an audience with what I’m saying. But over the years I’ve learned that some people in an audience like to be engaged visually as well.

It’s worth remembering that audiences are made up of three groups of people – auditory, visual and kinesthetic – and they all learn in different ways.

Auditory/Linguistic learners take in information through listening and speaking. They prefer to hear the content and verbally repeat it. This group might well prefer audio books to reading by themselves.

Tactile/kinesthetic learners are the ‘doers’. For information to really sink in, they prefer ‘hands-on’ practical examples or exercises.

So, slides can be helpful for different types of people in your audience.

But, if you are going to use slides, there are a few simple tips that can really help with your delivery of them.

The first challenge is that slide decks are often designed to do two things. They are designed both to be presented on a screen and to be sent out in advance or given as a takeaway after the presentation. One is designed for the presenter to add in the detail, the other is more like a self-explanatory book with all the details there to be read.

If you have this issue, I suggest making a copy of your deck and taking out as much information as you can, so that what you present on the screen is a slimmed down, cleaner version.

And then, when we come to deliver it, the audience wants to feel we’re having a conversation with them. They don’t want to sit through just another presentation.

So here are 5 simple ways to sound natural and keep your audience on track:

1.    Announce the next slide before clicking the button.

How often have you seen a presenter clicking the next slide and saying, ‘Ah, here we are, the figures for next year.’ Almost as if they’re surprised to see that slide!

Much better to say, ‘Let’s have a look at the figures for next year.’ Click. Then the slide appears. This makes the audience feel that you’re in control of the presentation rather than the other way round.

2.    Summarise the slide before moving on.

This subtly reminds the audience what the point of the slide was. For example, ‘As a result of the information on this slide, we now know X.’ It’s a good way to reinforce key messages by repeating them.

3.    At the end of a slide, ask a rhetorical question that the next slide answers.

So you could say, ‘Now that we know X, what do we do about Y?’ Click. Then the headline on the next slide would read, What about Y?

4.    Tell the audience where to look on the slide as soon as it appears.

Although you might be familiar with the slides, your audience has never seen them before. So if you have several areas on a busy slide – like a graph, an image and some wording – the audience won’t know where to look first. You’ll be speaking and they’ll be looking around the slide, not listening to you, trying to find out where you are.

5.    Say the exact words that appear on the slide.

Think of yourself as a guide, showing a group of tourists around a castle. When you’re talking about the oil painting above the fireplace, you don’t want them staring out of the window looking at the rose garden!

As a reminder of how not to do it – check out this brilliant comedy take on Boris’s recent Next slide, please routine. 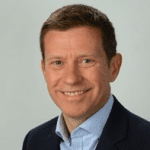